The practical importance of the preservation of our forests is augmented by their relations to climate, soil and streams.
John Muir

I missed being in the woods for months, this year. The winter seemed so long, late in the months, weeks and days of spring, and so intoxicating in the big city as if the antisocial conglomerate could catch up on me and strangle me to the death of my Soul. But I endured and the days of summer came back once more and I went hiking in the woodlands.

The green of the trees and the low light rays of the rising sun gave me a wonderful welcoming salutation in the morning. I could, then, feel the moist and the breeze blow through me and chill me out of my stuffiness from the hot city. I no longer felt like I was choking from the heat. I could finally breathe, although, at first, I resisted. It’s not a case of adaptation, just a case of trusting Nature, is all.

Good morning, trees! I said and continued on. I put my camera to my eyes and I shot a few handhelds. I knew exactly what the result would be. It was a simple moment. Its simplicity was drawn from the light, from the shapes of the trees lit and from the lines they created in the frame, topped with split tonning the entire picture, vignetting it, and voila! There you have it. The dark and cold green of the woods, and the glowing, a touch warm light from above. Nothing more… 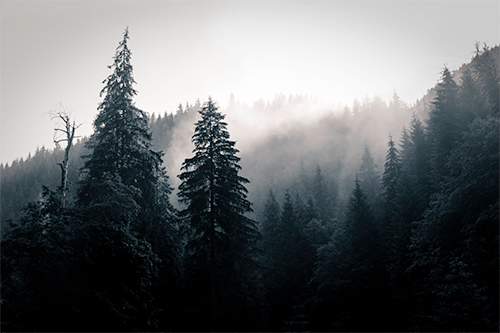 Then, the light rose a tad more. The trees were now backlit. What a feast for the hungry eyes of beauty!

It was a productive day for photography, but not for trekking. I barely reached the alpine meadows and ranges. I was a bit too tired to climb on such a trail, on such elevated paths. Nevertheless, I encountered many beautiful moments of light in the woods. I always wanted to photograph such moments when the sun rises through the forest, backlighting the trees. I always wanted to photograph such plays of light among the trees. 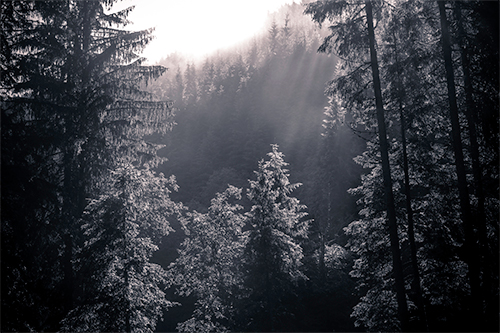 I don’t know, I guess these split tones, these color ranges, these kind of colorful tonalities haunt me for years. I remember, still, the first moments when my mind was looking for these kind of colors, a little after highschool, it was, I think. Every of my artistical endeavour was governed, somehow, by them. My paintings, my drawings, lately my photographs have them within their palette and express them with such and eerie, subtle force that haunts me and whoever sees my works. People keep telling me of my moods when composing such works. I don’t deny it, but I like them. Although they seem a little bit grim, a tad obscure, maybe with a sad tone and feel but their appearance is not ment to scare people, but to invite them to stillness, to silence, to listen to the sounds of Nature and to meditation. Dark, low-key tones are now a part of most of my fine-art photographical works. I’d like to experiment more with this style. I just love it. And it doesn’t scare me at all.

The woods, the trees in the forests are a great subject to photograph and I can’t get enough of them. I keep coming back to the woods and to the atmosphere there. Their subtle silence is so powerful that it shouts into my ears not with a force so easy to perceive, as if it was physical, but rather otherworldly, not from this dimension and still, strong enough to make me feel it here. The trees are creatures from another world in which we seldom dare to venture, but mostly unconsciously when we sleep, sometimes when we drift unknowingly into the astral planes of existence, within these places.

The trees are strong creatures, you know. Although they seem physically still, they are so alive and moving about that one can hear whispering through one’s ears not with words but with their presence. It feels like someone is behind you or some move behind you many times. It feels like the forest is a crouded places but it’s not. There’s room to breathe and to move. I wish I could only see them as they really are.. you know, the trees! 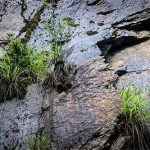 A Green World for the Little Ones: Basis of LifeInspirational, Photography 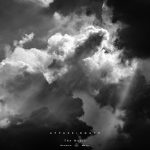