I love winter. This season, for me, brings serenity, peace, stillness, of course, invites to meditation and contemplation of what is, the everyday here and now.

But what could winter be in the city without trees, right? What would it be without a patch of grass covered in snow? What could it be without parks and benches covered in snow? Did you hear the sound of silence after a snowstorm, when the snow covers much of the land and everything on it? It’s like you’re in a recording studio. Everything just shuts up, even though there are cars outside coming and going on the streets, but there is utmost silence. The noises of the streets, that noise pollution so characteristical to the urban areas is dead. Now you have time to think. 🙂

Winter, though, is most beautiful when you’re out in Nature. The trees, their branches, the hills, the grasslands, the mountains, all covered in snow are just plainly mystical. But if you add fog to this, you’ll get the most mysterious atmosphere of all. You’ll want to explore it but negative thoughts and fears are no use. Be brave and dare! Fog is just fog, snow is just snow. There are no dangers.

So I was ascending through the forest recently, in this transitional month of November, and, unfortunately, the trees were already bare of leaves. I was expecting some colours, due to the fact that this autumn was very warm and sunshiny, so to speak. Instead I saw something that drew my attention immediately and impressed be even more (I should say that it surprised me as well, just like Nature always does this), the trees and their branches were powerfully lit by the Sun in such a way that they looked like they were covered with a bit of snow. The light of the Sun gave me this curious effect to play with and I was very delighted for this sight.

This reminded me that I am really awaiting winter. 🙂 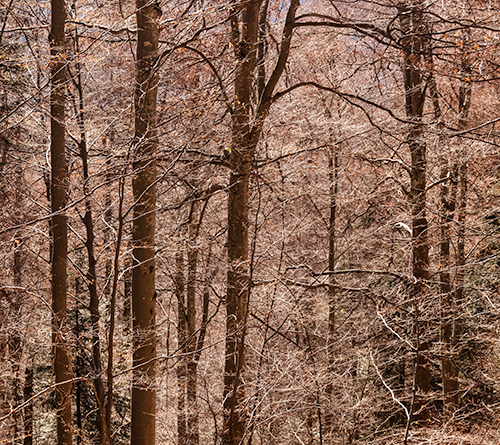